Hello, Stampers!  I’m back!  The summer has flown by.  We moved to a new house in a neighboring town in early July and spent the rest of the month settling in—and realizing we still have too much “stuff!”  We have the basics in place, but we will be unpacking for months to come!  Our street is named Grand Vista Drive—aptly named for our beautiful view of the nearby Bitterroot Mountains.  A week after the move, a lightning caused forest fire ignited in our mountains and our grand vista has not been so grand.  Six weeks of smoke and haze is getting old.  It is hard to say what the view will be like once the fire is out and our skies have cleared!  We are lucky to be at a safe distance from the actual fire, but many people in the area have been evacuated.  At this point two homes and numerous outbuildings have been destroyed.  We are praying for rain and snow to put an end to it!


Last week we had our grandsons (ages 12 and 10) from the Seattle area with us.  So much fun and activity!  They have returned home to prepare for the upcoming school year, and we are getting used to a quiet house once again!  Bittersweet…..


My craft room is organized, and I am preparing for card making classes next week.  So--it is time I resumed writing my blog!  In the next few posts, I will be writing about some very basic techniques that every card maker should know.


The masking technique is used to add dimension to a design.  There are times when you want an image to appear in front of another image.  I am using a pig stamp to show how this is done.

Decide what image you want to appear in the FRONT of the design.  Always stamp the front image first. I wanted two pigs on my cardstock—one standing slightly behind the first.  I stamped the first pig onto a piece of card stock.  I then stamped the same image onto a thin piece of scratch paper.  (Sometimes I use sticky notes instead of scratch paper.  If using a sticky note, stamp the image where the sticky part is on the back.


Cutting slightly inside the lines, I used my paper snips to cut around the scratch paper pig. 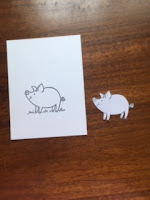 I placed the cut image over the image of the pig on the card stock and used a small piece of washi tape to hold it in place.  (The sticky part of the sticky note works well for keeping the mask in place if you decide to use sticky notes.) 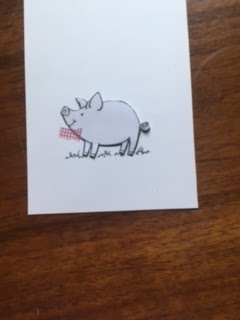 To add the pig's friend, I inked the stamp and stamped over the top of the masked pig on the card stock. 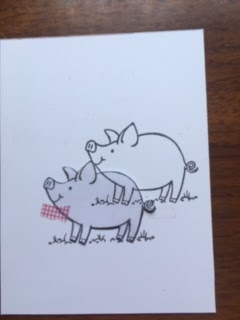 I removed the mask and “voila”--two pigs--one in front of the other! 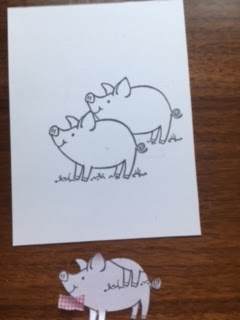 I wanted the pigs to be standing in front of a bush.  I needed to mask both pigs this time, so once again I stamped a pig on scratch paper, cut it out, and covered both pigs with a mask, stamped the bush image. 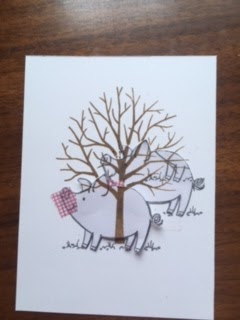 I removed both masks to show this image: 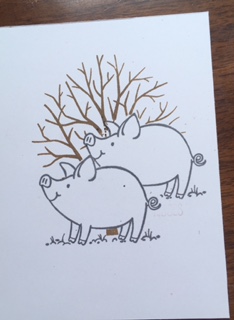 I use this simple technique often.  I hope you have found my information helpful!  I look forward to your comments and suggestions.  I am new to blogging and welcome advice!

Jean's Stampin' Up
I have been crafting with paper and fabric for many years. My daughter and I have collaborated on numerous projects and have named our “company” DaniJeanCrafts. I have created greeting cards for over twenty years and became a Stampin’ Up independent demonstrator in February of 2016. It was the best decision ever! Sharing my love of stamping with others has been fun!